I am often asked from where I draw inspiration for design projects. It’s a difficult question to answer. As a designer you’re always observing and absorbing the world around you, noticing details, shapes, finishes and asking yourself why something is the way it is. Sometimes the origin of an idea is more tangible and easier to identify than others and so it was with the design inspiration for Lady Kathryn V’s main entrance lobby.

It may not be for many years that something comes back to you as inspiration for a design. It can be immensely frustrating when you can remember how something you’ve seen has moved you and you know you have a sketch or a photograph somewhere to back up the memory but no amount of rummaging through drawers, boxes of old photographs you had printed at the chemist before the digital age or badly organised computer files provides the evidence to refresh the faded impression of an idea which resides in the depths of your brain.

These days social media applications like Pinterest and Instagram provide the perfect opportunity to record and store these moments and indeed open up new opportunities to gain inspiration from other people’s moments.

As we embarked on the design process for Lady Kathryn V in 2007, one such memory from a trip to Chatsworth House in Derbyshire in the UK came immediately to mind. Arriving at the top of the main staircase from the entrance hall, I was greeted by a full height window with an urn silhouetted on the window sill. Looking beyond a somewhat unsightly blind which had been installed to protect the antique furnishings from the punishing UV light, this was a terrific way to arrive on the first floor landing. Little did I know at the time that I would one day have a use for the memory as inspiration for a design project. Fortunately, in this case I managed to find the photograph to back-up my memory. 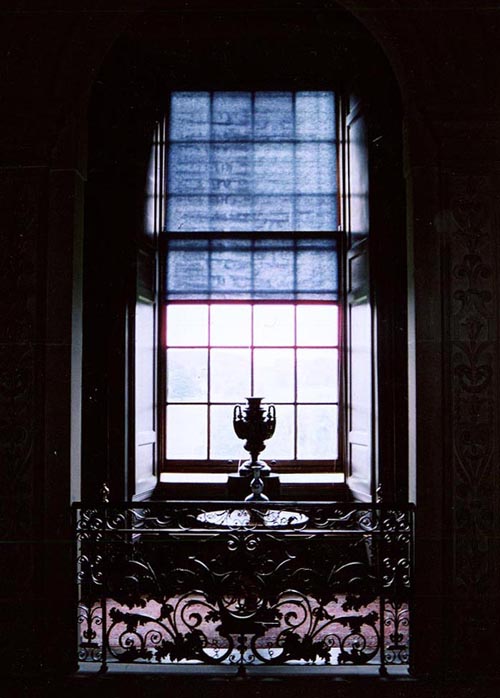 The exterior of Lady Kathryn V is designed by Espen Øino and we worked together to develop the General Arrangement for the boat to suit our client’s purposes. I wanted the main deck entrance lobby to become a place to linger rather than a place to simply pass through so we designed an atrium taking in the main deck and bridge deck with a skylight emerging through the sole of the sun deck to bring as much natural light into the lobby as possible.

Bouncing light around interiors using mirrors is a familiar trick and so the idea of a two deck high mirrored window with the staircase spanning the width of the window was born.

I produced some initial sketches at scale 1:50, blew them up to a larger scale, added some watercolour, and presented them to the clients at a meeting which took place during the 2007 Monaco Yacht Show. 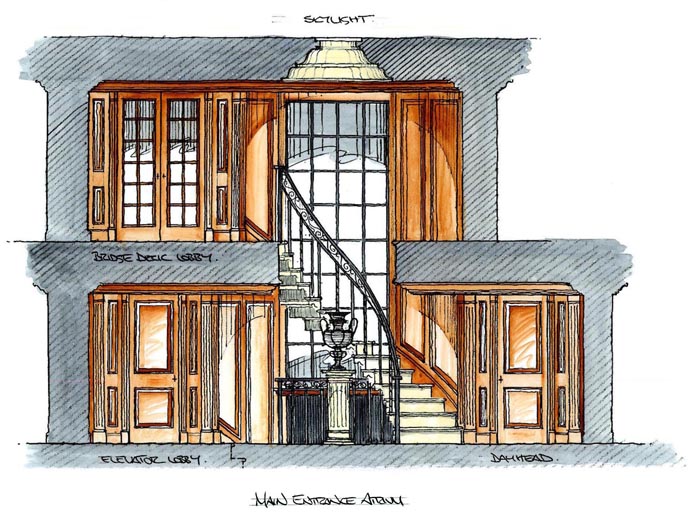 With the concept duly approved, we developed visuals and subsequently AutoCAD drawings which gave us an opportunity to fine-tune the perfect proportions which are so ingrained in ancient architectural theory. Yachts, unlike houses, rarely permit this kind of indulgence in finding perfect proportion and the potential was there for us to fail completely due to the (relatively) restricted space. Happily, the number of panes of mirrored glass worked out perfectly, and we had scope to adjust the proportions until we had them exactly how we wanted them. 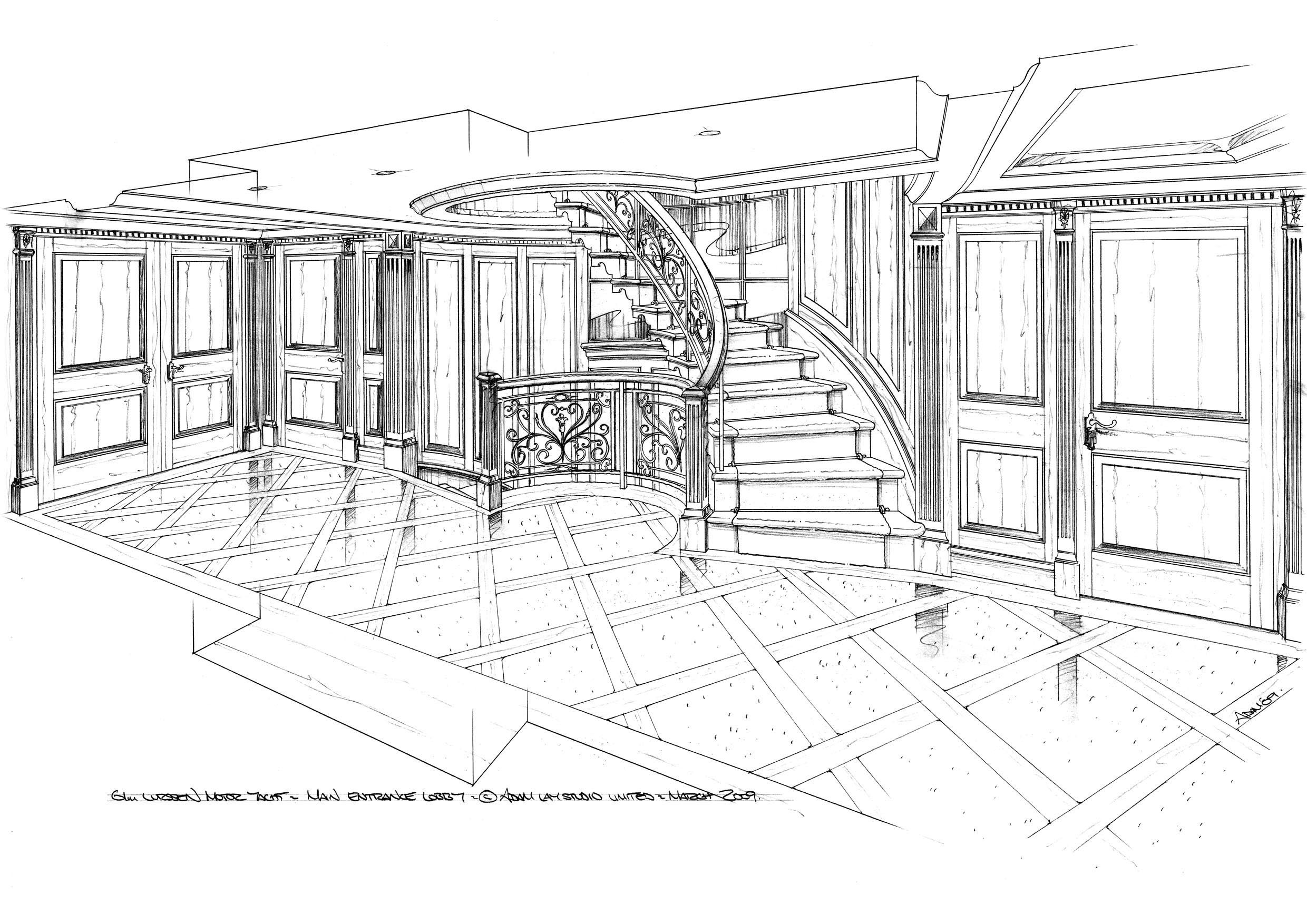 At the same time the shipyard and staircase builder were putting the necessary structure in place to allow the staircase to be distanced off the mirrored window to enable it to pass unsupported across the aperture without interrupting its form. Directly below was a sill forming a lintel allowing the staircase going down to the lower deck guest cabins to pass directly beneath the mirrored window.

Lurssen’s appointed staircase specialist was Belz Treppenbau. I remember meeting Mr Belz Senior for the first time, his massive hand making mine feel like a child’s. He spoke to me warmly and loudly in German, making jokes and laughing uproariously. I smiled and nodded, not understanding a word but after seeing his factory and the incredible staircases his team had built, it was clear our project was in safe hands. 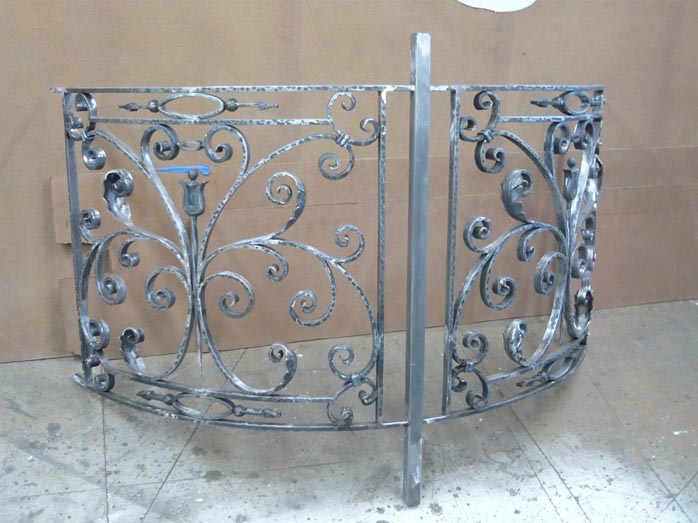 Throughout the build process we were fine-tuning and tweaking details to ensure we maintained adequate distance between the handrails and making sure all the details and junctions sat comfortably together. It doesn’t matter how many drawings you provide, something as complex as a staircase can only be fully worked out in three dimensions on-site during design and construction meetings. 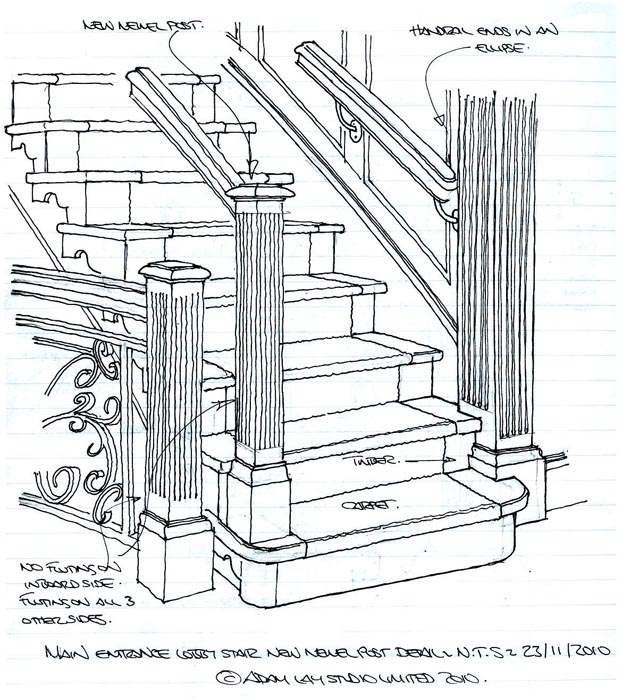 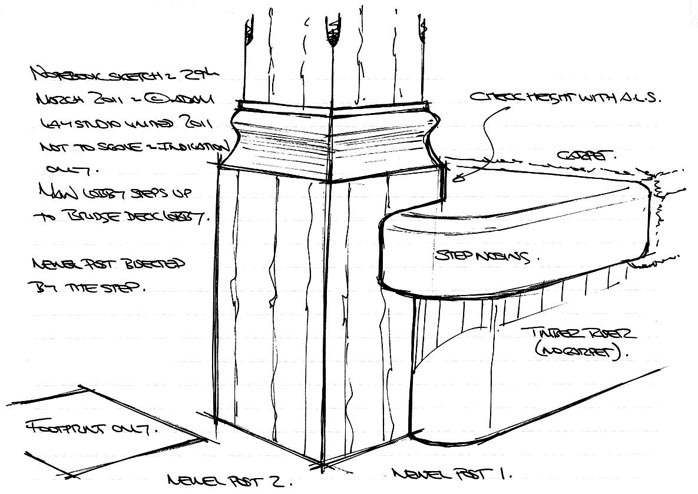 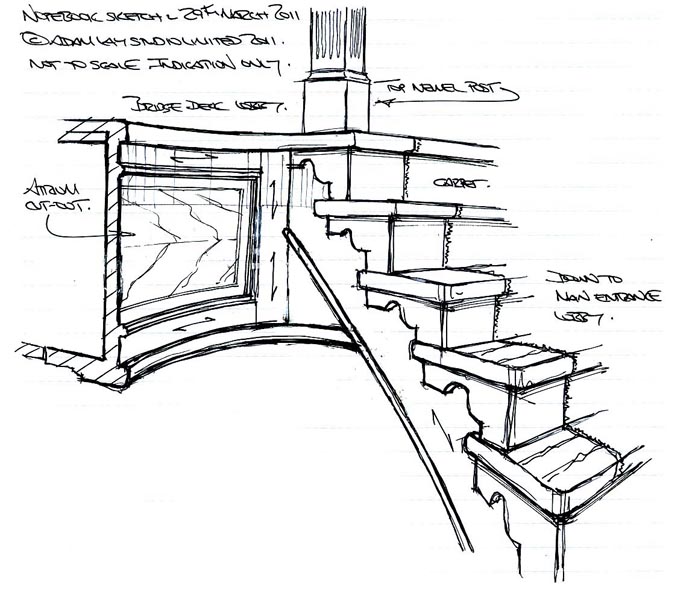 The ‘Chatsworth Urn’ was replaced by a beautiful bronze figurine, an elegant lady who has graced the entrance lobby of the owners’ previous yachts, and stands on her honey onyx column keeping watch over the comings and goings of the yacht’s main thoroughfare. 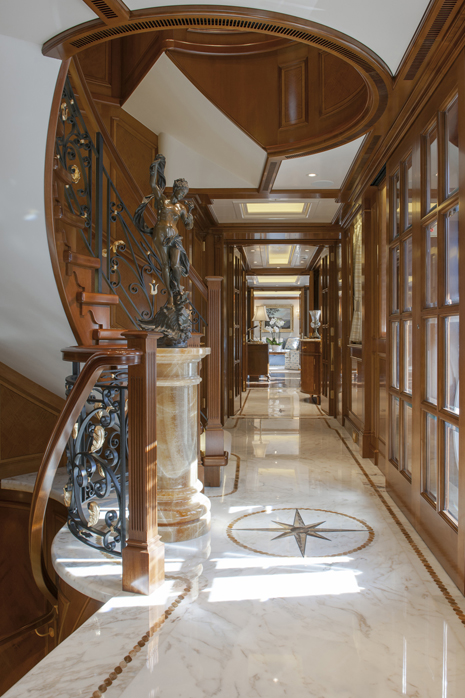 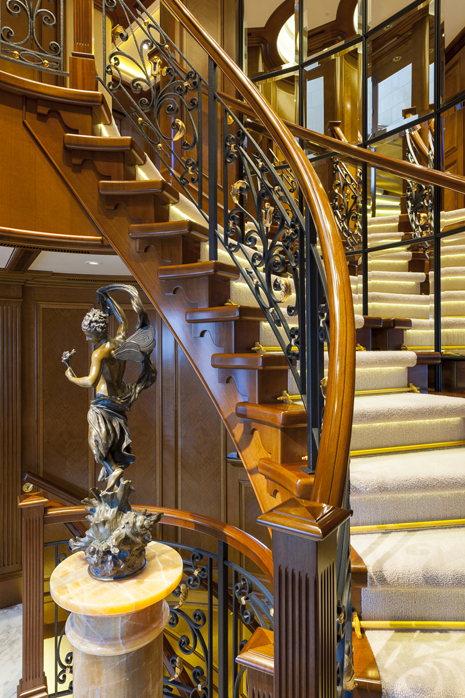 The end result is spectacular. The shipyard, the project managers, Belz Treppenbau and Greenline did an incredible job to pull all the elements together. 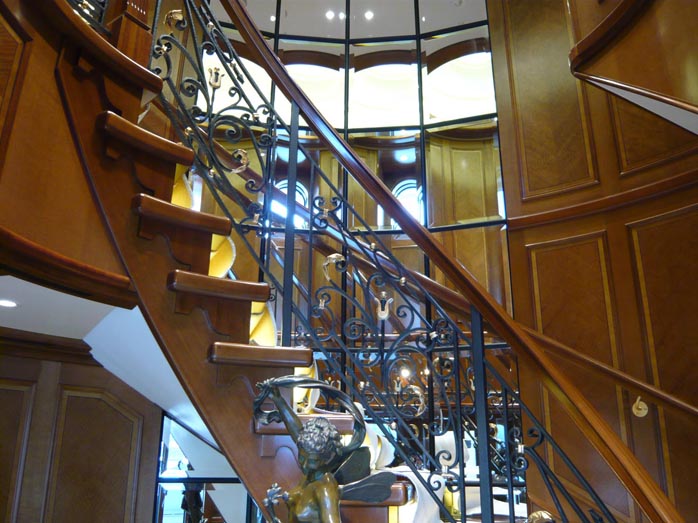 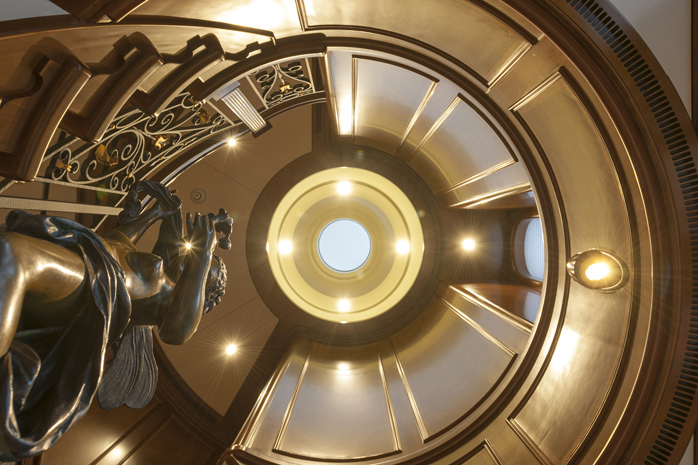 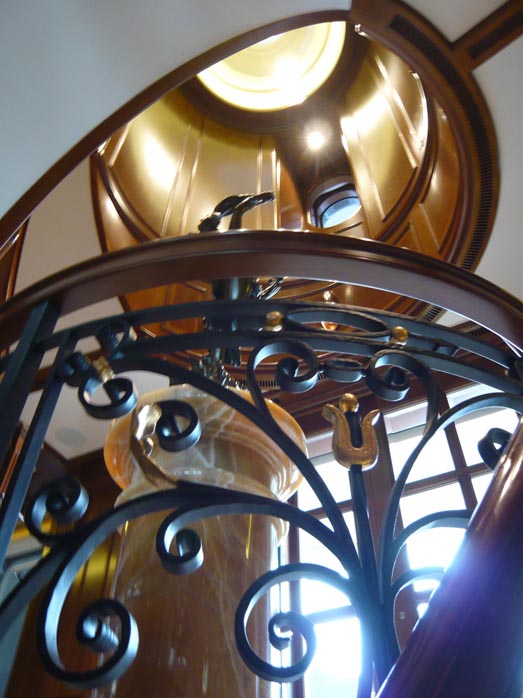 I think it’s true to say that the scale and integration of the window is such that at first, you hardly notice it’s there. You certainly don’t immediately notice that the mirrored window runs behind the staircase from the bottom of the main deck to the top of the bridge deck. In that sense, it’s true to it’s origins; the window in Chatsworth House. It’s there, but it’s not the first thing you see. It’s quietened by the bigger picture; the staircase wrought-iron work, the bronze figurine and the atrium itself. Standing quietly in the background is a window of pleasing proportions, subtly bringing all the other elements together, and bathing them in light.