Whilst working for John Munford from 1995 until 2002 there was a photograph hanging on the studio wall of Endeavour outside the Royal Huisman Shipyard. It was taken from the top of the mast during the launch party and is a truly unforgettable image. 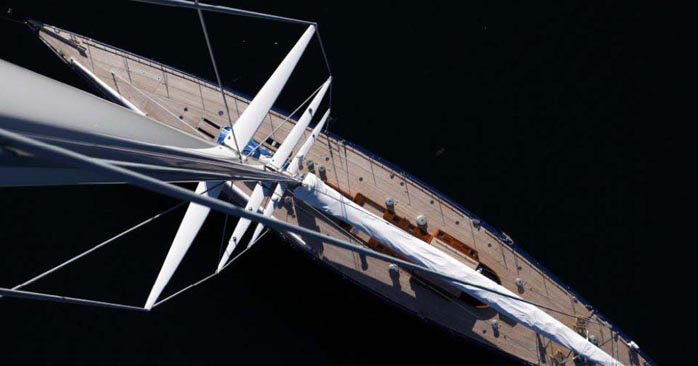 John also had a drawer full of detail drawings from Endeavour’s original reconstruction in the mid-1980s. My first sight of the sectional drawing through the length of the yacht is something that will stay with me forever. What a fabulous profile!

Little did I know that I would be drawing that same section as part of the GA drawing for another J-Class, Velsheda, in 1996. Back then I could never have imagined I would have the opportunity to work on Endeavour’s refit in 2010/11.

Endeavour is to my mind the most beautiful of the J-Class yachts and still the most beautiful yacht afloat today. The story is incredible and it wasn’t until relatively recently that I discovered a connection very near to me in the Test Valley in Hampshire, UK. 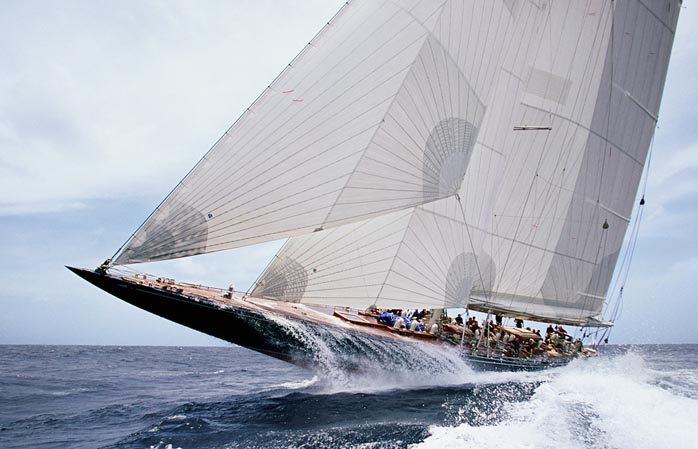 Half a mile South of where I live and work is the estate once owned by Sir T.O.M. Sopwith (1888-1989) who bought and campaigned Shamrock V, making changes to her keel and rig configuration. Having familiarised himself with the J-Class, Sopwith commissioned Endeavour in 1934 selling Shamrock to fellow aviator Sir Richard Fairey (1887 -1956) who lived on the neighbouring estate on the opposite side of the River Test.

Endeavour’s refit was a matter of local pride for me but it was also an opportunity to work together again with my previous employer, mentor and good friend John Munford.

Yachting Developments in New Zealand won the job of refitting Endeavour so we were working remotely from the other side of the world. Jon Barrett Associates project managed with Captain Simon Lacey and Project Coordinator Katherine Bruce looking after the project on a day-to-day basis for the owner’s team.

The work was extensive. The complete weather deck was removed and replaced including all deck equipment and the guest area interiors were refinished together with a small modification to the owner’s bathroom to replace the old cast iron bath with a shower. The whole crew area forward of the mast was removed, redesigned and reinstated keeping the essence of the original crew area whilst updating the layout for greater crew comfort, privacy and the installation of modern appliances.

We produced proposal drawings for Yachting Developments to make a full size mock-up of the area which was then fine-tuned. The GA layout was developed further by hand before working-up the detailed plans, elevations, ceiling plans and full size details for the shipyard in AutoCAD using the original drawings from circa 1985 as a guide.

The crew accommodation would comprise twin crew cabins forward with upper and lower bunks sharing a shower to port and a head to stbd which were deliberately separated to ensure the shower would not be out of use whilst another crew member was using the head. 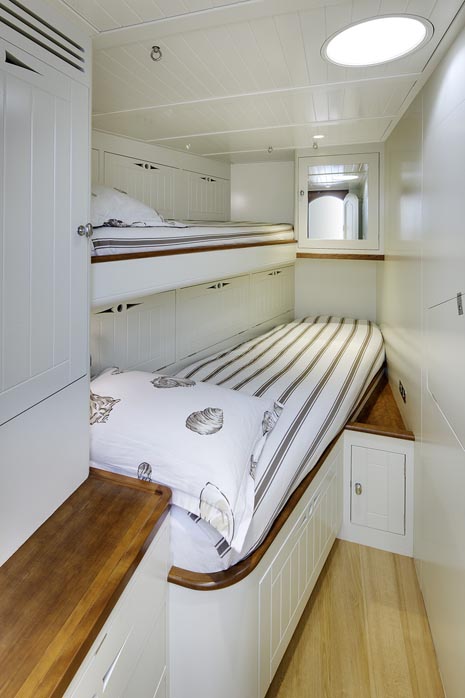 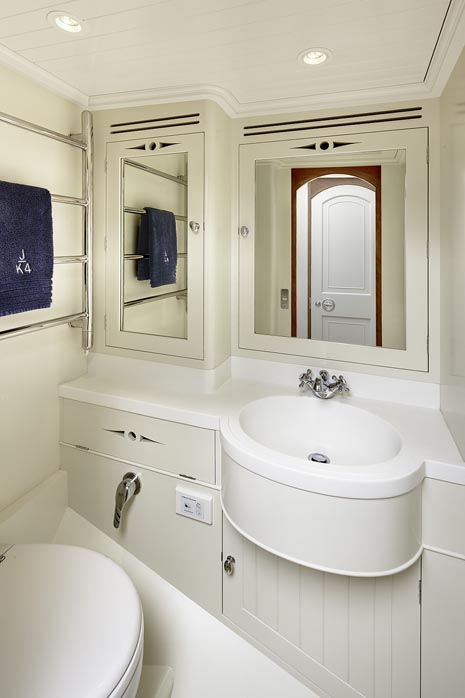 A large deck hatch with crew ladder was located on centreline with an open crew mess to port and laundry area to stbd. 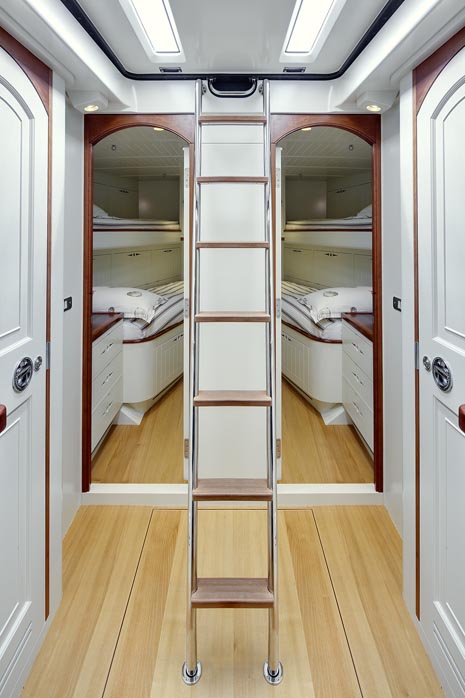 The crew mess is deliberately open to the galley to ensure good communication and visibility between crew members. 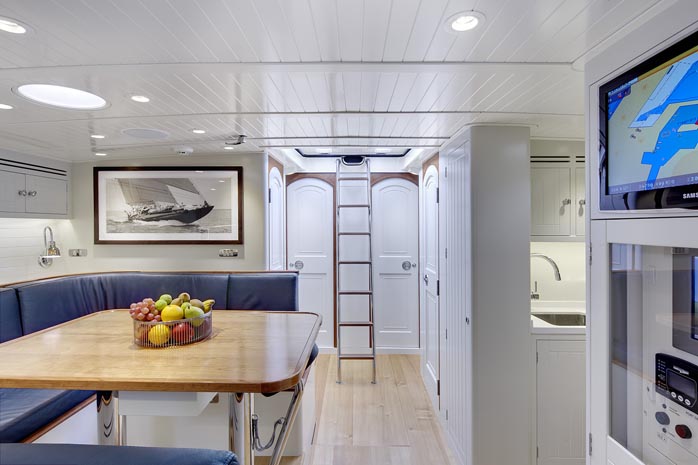 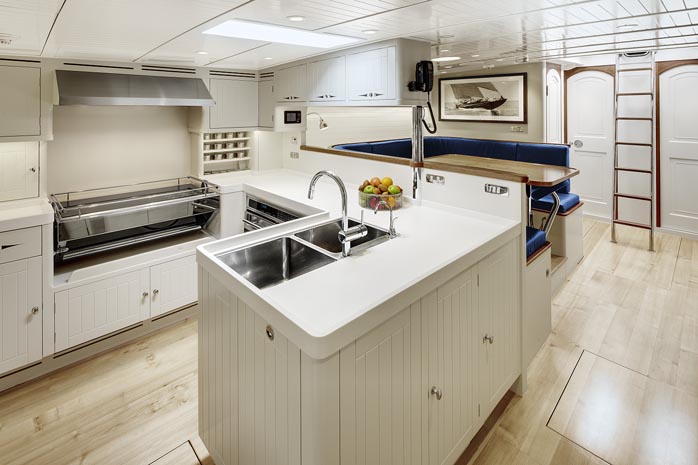 On stbd side, in a similar position to where it was originally, is the captain’s cabin equipped with its own wet room. 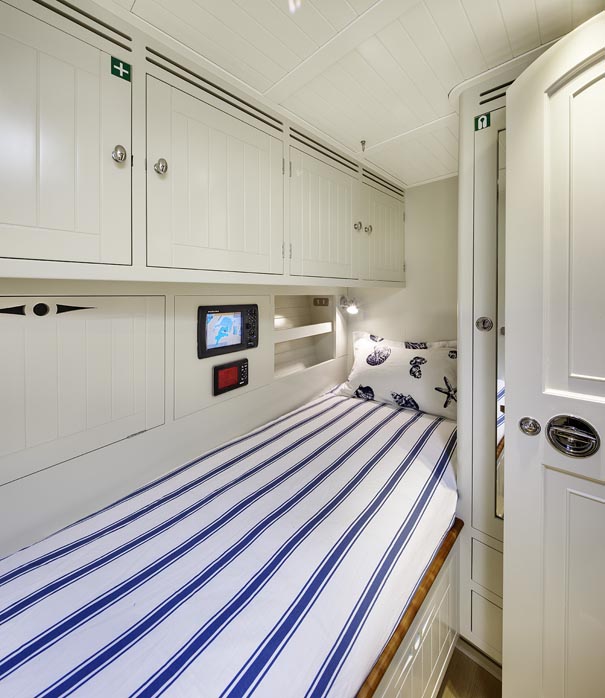 The simple white painted boarded effect with minimum cherry trim achieves a timeless classic and yet contemporary feel. The twin dart finger/ventilation holes in the drawers have been carried through from the original design as were the beaded framed panels in the cabin doors.

John Munford and I didn’t visit the shipyard which is testament to modern technology, team work, good project management and to Kiwi ingenuity and self-sufficiency. We had an incredibly detailed set of original drawings to work with from John Munford’s archive and Yachting Developments’ excellent craftspeople were able to take our drawings and fit everything into the stripped-back hull.

I consider it an honour to have played a small part in Endeavour’s history and continuity.